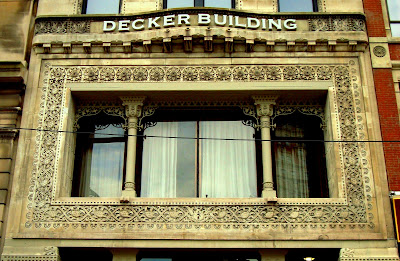 Otherwise dense with representations of various design trends, New York is relatively dispossessed of one: Art Nouveau. The organic, floral- and plant-inspired motifs of the style garnish the Decker Building at 31 Union Square West, designed in 1892 by John Edelman. On the sixth floor from 1968 to 1973 was home of Andy Warhol's Factory, where he was shot by Valerie Solanas. 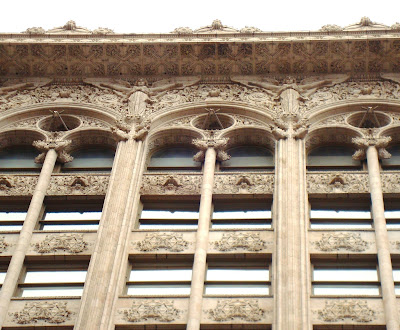 No. 65 Bleecker Street: Edelman’s protégé, Louis Sullivan, designed the terra-cotta-clad Bayard-Condict Building in 1897, one of city's first steel skeleton-frame skyscrapers (at 13 stories) and Sullivan's sole work in New York. Over the architect's objections, the angels were a belated addition at the request of the client. 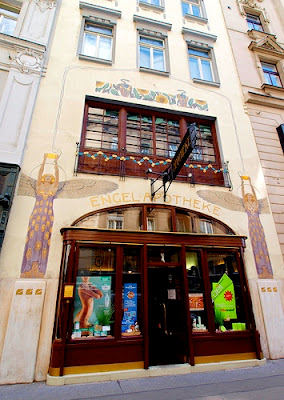 Sullivan's celestial beings, by the way, predate by four years those on one of Vienna's most celebrated exemplars of Art Nouveau, Oscar Laske's "Angel Drugstore." 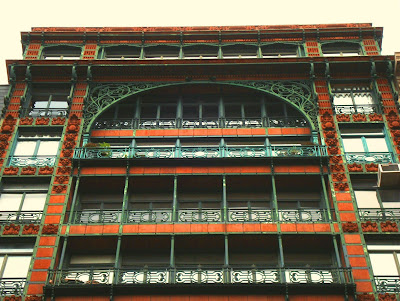 No. 561 Broadway: The steelwork of Ernest Flagg's Singer Building of 1902 expresses another attribute of Art Nouveau--flowing curvilinear forms. 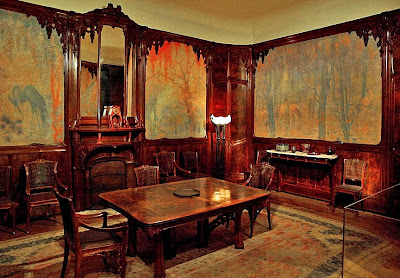 The Metropolitan Museum of Art: Installed exactly three years ago tomorrow after being in storage for more than four decades, the Wisteria Dining Room is the only complete French Art Nouveau interior on display in the United States. It was designed in 1910 by Lucien Lévy-Dhurmer for a home in Paris near the foot of the Eiffel Tower. Wisteria elements flourish on every aspect--including the door handles and drawer pulls. The standing lamp is meant to evoke the twisted trunk of the wisteria vine. 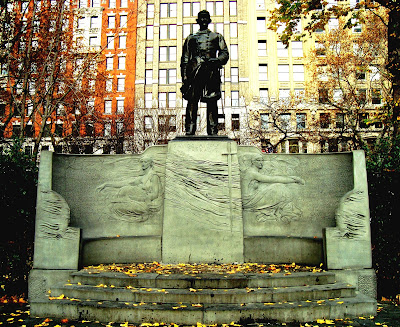 Madison Square Park: Many authorities consider the meandrous relief by Augustus Saint-Gaudens on this pedestal (designed by Stanford White) as the first example of Art Nouveau in America. It was unveiled in 1880. On the left is Loyalty, on the right, Courage, and standing above them is a bronze Admiral Farragut (of "Damn the torpedoes" fame), also by Saint-Gaudens. 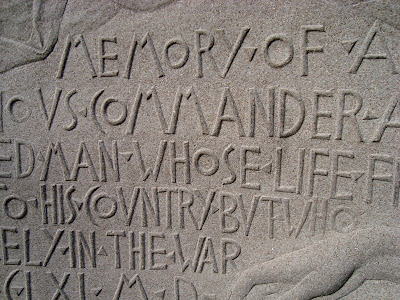 Saint-Gaudens distributed a hefty application of lettering on the monument, unprecedented at the time, and the font looks very Art Nouveau. 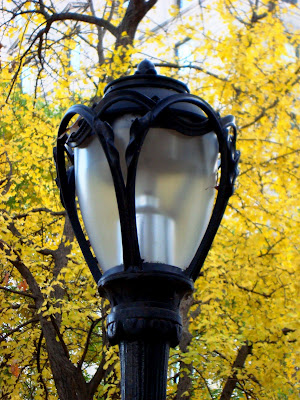 Central Park: Nighttime electrification of the park began a century ago, in 1910, with lamps designed by Henry Bacon that bear a marginally Nouveau signature. Bacon soon afterwards designed the Lincoln Memorial in Washington. 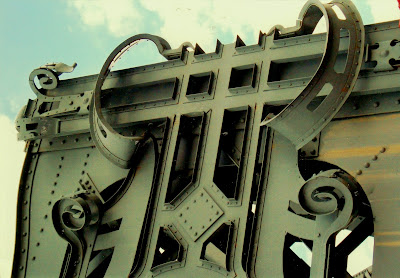 Williamsburg Bridge: This 1903 suspension bridge, the second to cross the East River, opened at the peak of Art Nouveau popularity. In some of the details of this otherwise purely machine-age span, architect Henry Hornbostel seems to acknowledge the trend. 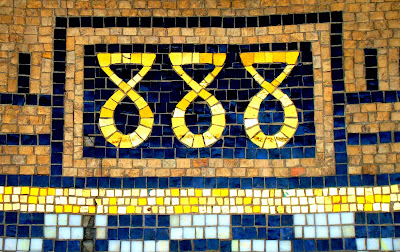 Grand Concourse, Bronx: On a 1937 Art Deco building designed by Emery Roth are these stunning (yet out-of-sync) Nouveau-esque numbers. 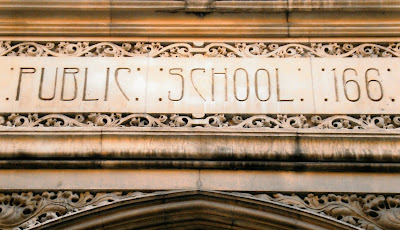 No. 132 West 89th Street: The Richard Rodgers School of the Arts and Technology went up in 1898, and though its overall style is Collegiate Gothic, the letters over the front door look distinctly Art Nouveau. 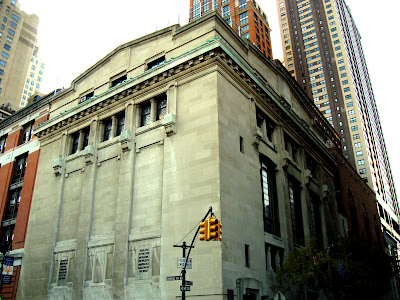 No. 2 West 64th Street: The New York Society for Ethical Culture Hall  departed starkly from the prevailing building styles of its time, and architecture critics built it up as one of the best Art Nouveau buildings of the century. It was 1910 and the Art Nouveau movement was coming to an end. 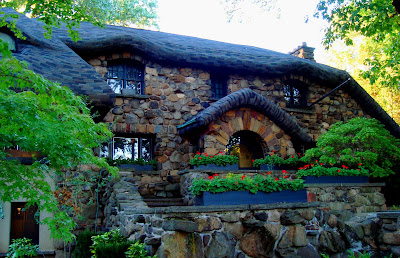 No. 8220 Narrows Avenue, Bay Ridge, Brooklyn: The Howard E. and Jessie Jones House, with its sinuous pseudo-thatchery, is one of two examples in New York of the fairy-tale fantasy known as Black Forest Art Nouveau. As much Arts and Crafts as it is Nouveau (the styles are kissing cousins), the house was designed in 1916 by James Sarsfield Kennedy. 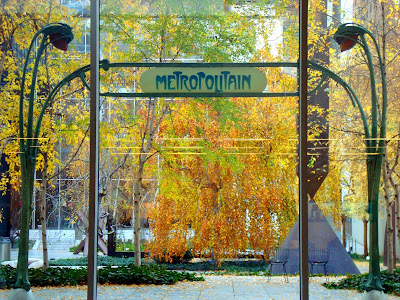 The ﻿Museum of Modern Art's Sculpture Garden: A 1900 entrance to the Paris Métro by Hector Guimard. To look at more organic design, visit: Rustic Architecture and Accoutrements in Central Park
Posted by David Cobb Craig at 12/03/2010