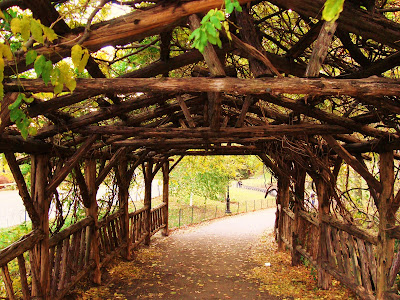 Peppered throughout the park's 843 acres are varied specimens of rustic design--like this wisteria arbor near 72nd Street and CPW. 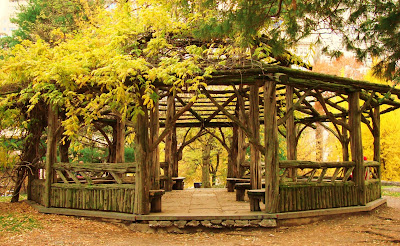 One of the grander exemplars of this bucolic style is Cop Cot near Sixth Avenue and Central Park South. (Cop Cot is Anglo-Saxon for hilltop cottage.) 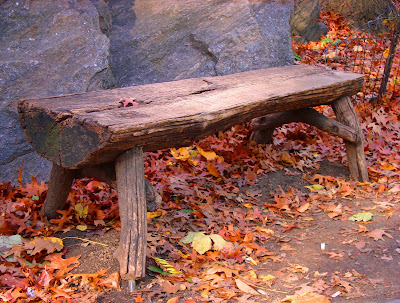 Here's a humbler instance--across from the American Museum of Natural History. 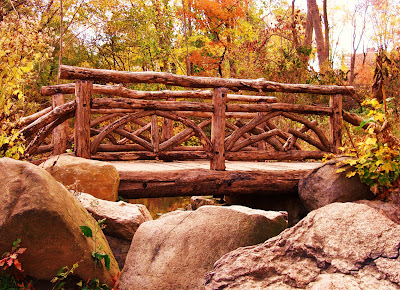 Landscape architect Andrew Jackson Downing is said to have introduced the rustic style to our youthful nation around 1850. As an advocate of good taste, Downing was the Martha Stewart of his day and, for the time, just as much a celebrity. Bridge No. 32, above, provides passage over a stream in the North Woods. 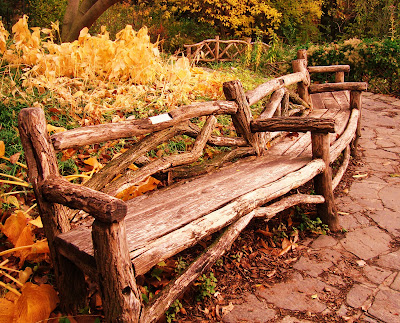 It was in Central Park that Americans were first exposed to the Arcadian allure of the rustic style, thanks to the designs of Calvert Vaux, a protégé of Downing and, along with Frederick Law Olmsted, co-designer of the park. Above is a graceful suite of benches in the Shakespeare Garden. 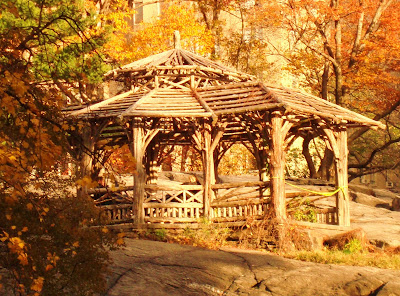 Adirondack architecture is a byname of the rustic style, expressed here by a shelter in the Dene near 68th Street and Fifth Avenue. Olmsted bestowed quaint appellations to various features of the park, and dene means dale or valley. 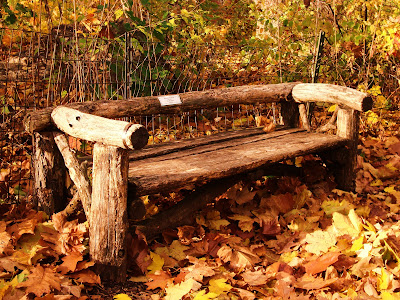 Since mid-19th-century Americans held deep-seated beliefs that our new nation's spiritual values rested in nature, this rustic bench--near the Pool--can be construed as a lofty cathedra from which the masses could savor it. 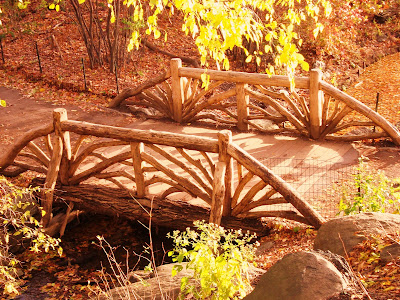 Affording a path over the gorge that flows from the Ramble into the Lake is the Gill Bridge, newly constructed from black locust. 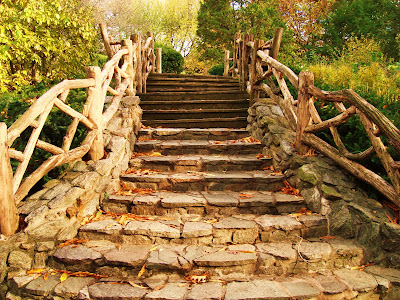 Many other naive hallmarks of the park (like these rustic railings near Shakespeare Garden) are fashioned from black locust, sometimes from trees that grew in the park. Cedar is another typical material. 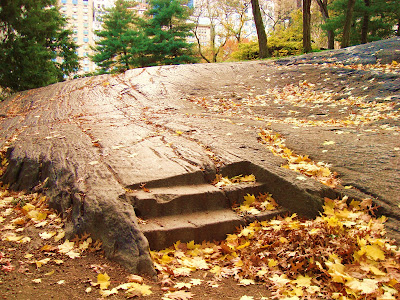 Reflecting the organic ideal of the rustic style--but in an almost Modernist way--these steps were inscribed into mica schist near Central Park South. This 450-million-year-old schist occurs not only in the park but throughout Manhattan, providing foundation for the skyscrapers that assert such blunt contradiction to the park's sylvan designs.
To look at more pictures of Central Park, visit: Springtide in Manhattan
Posted by David Cobb Craig at 11/22/2010