A Scurry of Decorative Squirrels in N.Y.C. 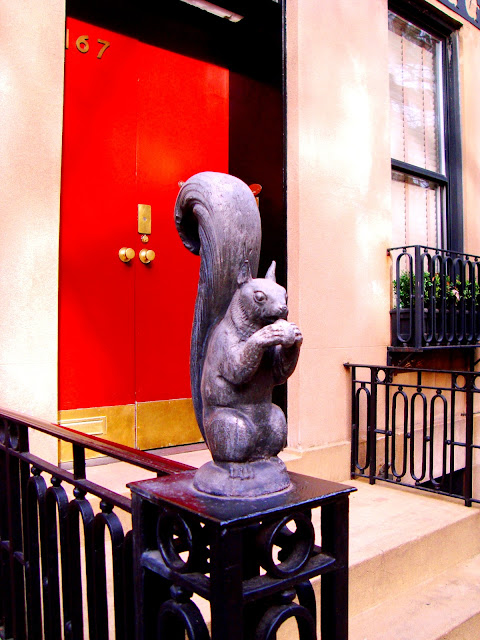 At the entrance to 167 East 74th Street stands this squirrel, one of a pair. 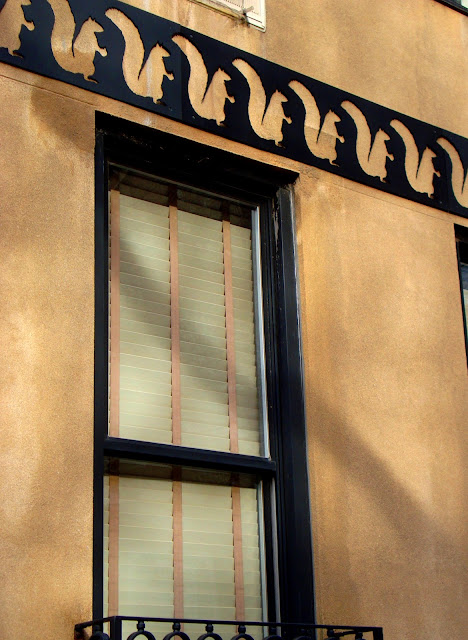 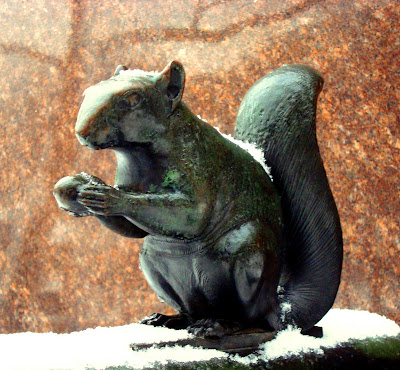 At the entrance of Central Park's Ancient Playground--Fifth Avenue and 85th Street--is this bronze squirrel. 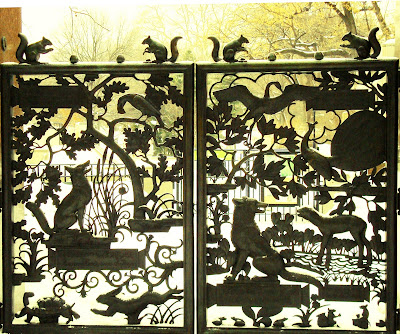 The acorn-eater is one of four atop the Osborn Gates, which depict stories from Aesop's Fables. Designed by Paul Manship and installed in 1953, the gates were removed in 1972 after vandalization and put back into place, restored, in 2009. 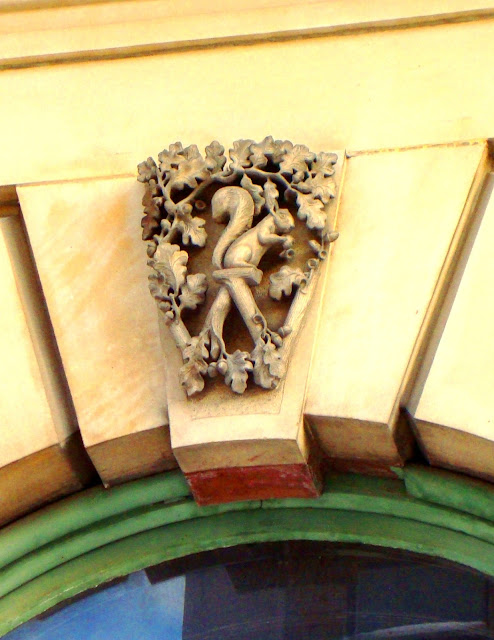 Salient symbol of saving, the squirrel makes an apt adornment for the window keystone of the former Kings County Savings Bank in Williamsburg. 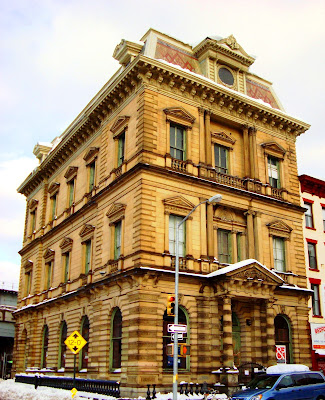 Made of Dochester stone, the bank was designed by King & Wilcox and opened in 1868. 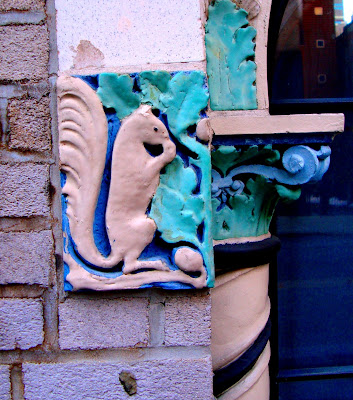 A first-floor window-surround dating from the '20s on the Belvedere Hotel, 319 West 48th Street. 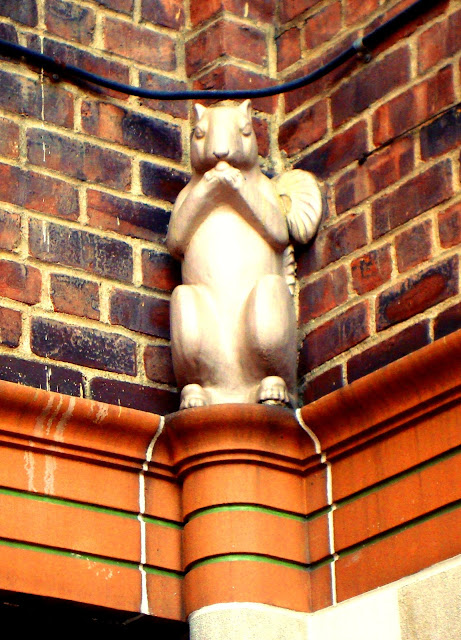 Terra-cotta squirrel at the Parkchester housing complex in the Bronx. To look at more of these decorative elements at Parkchester, visit: Alluring Architectural Appliqués in the Bronx

One of a dozen squirrels that are part of the architectural whipped cream on the Cornwall, 255 West 90th Street. This 12-story edifice went up in 1909 and was designed by Neville & Bagge. 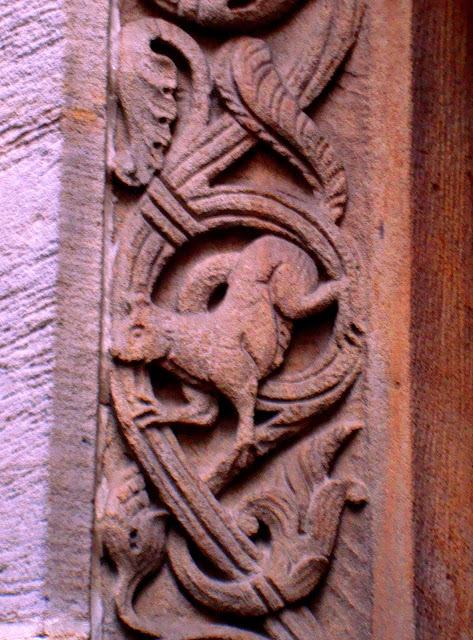 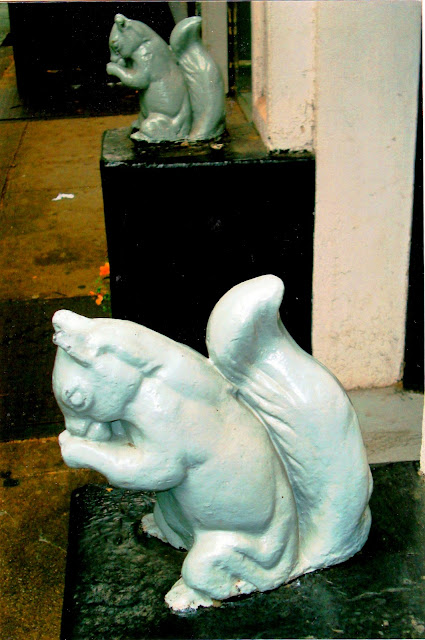 Twinned squirrels at the entrance of 19 Christopher Street. 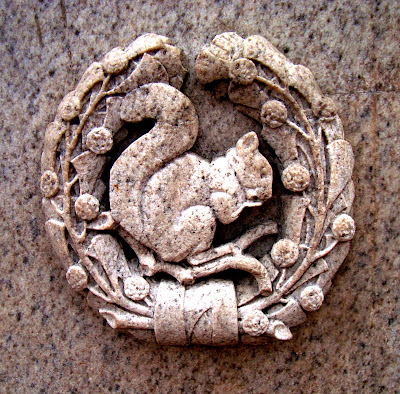 On the Waldo Hutchins Bench in Central Park is this enwrethed squirrel attributed to Corrado Novani and the Piccirilli Brothers Studio, the firm celebrated for carving works by renowned sculptors, including Daniel Chester French's colossal centerpiece for the Lincoln Memorial. 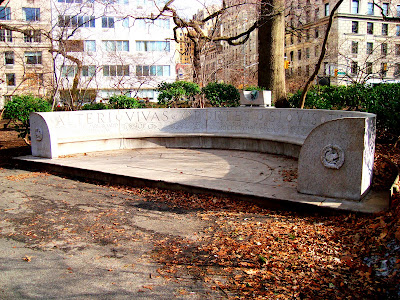 Dedicated in 1932 near Fifth Avenue and 72nd Street, the marble exedra marks time in two methods--with a sundial on the rear center and via three grooves inscribed into the paving that match shadow lines from the bench on the vernal and autumnal equinoxes. The forward-thinking squirrels (there are two) remind us to treasure however many days the Fates have allotted each of us. 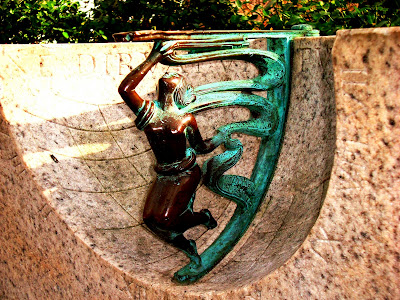 The gnomon of the sundial was sculpted in Art Deco-style by Paul Manship, who also created the above-referenced Osborn Gates.
To look at more design elements of the park, visit: Rustic Architecture and Accoutrements in Central Park
Posted by David Cobb Craig at 4/08/2011