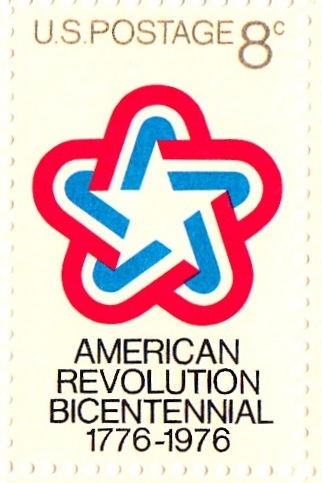 This 1971 stamp features the official logo for the nation's 200th birthday, designed by Chermayeff & Geismar. 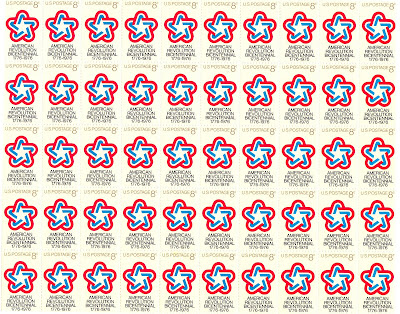 The American Revolution Bicentennial Commission chose the logo from more than 100 submissions. The two stars symbolize the two centuries of the country's existence, and the free-flowing lines of the outer star, said the commission, "are intended to evoke a feeling of festivity and suggest the furled bunting traditionally used in times of celebration throughout the nation." 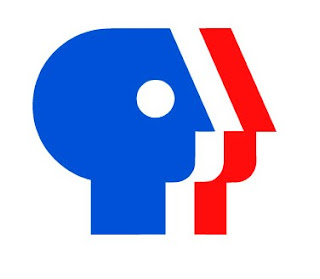 This is the logo Chermayeff & Geismar created for PBS around the same time. 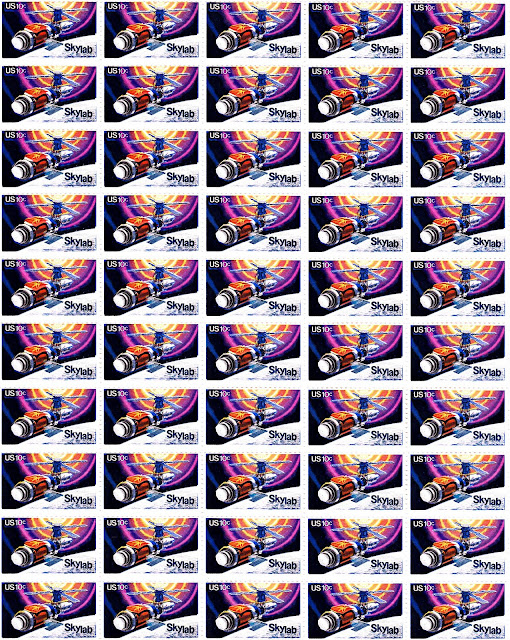 This purple 1974 stamp pulsated as loudly as the disco music that the same year began to top the charts. 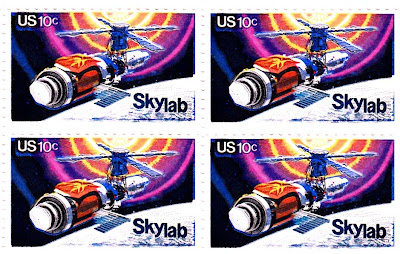 Flaunting bold Helvetica (then becoming the go-to type font), the stamp honored the year-one anniversary of the launch of the nation's first space station. In 1979, amid global Chicken Little-like anxiety if not hysteria, Skylab fell back to earth, raining debris into the Indian Ocean and onto Australia, where the municipality of Esperance fined the U.S. $400 for littering. (The fine has yet to be paid.) 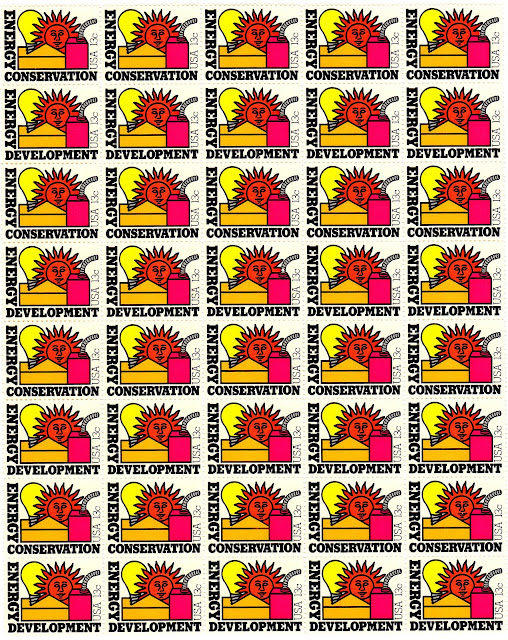 Amnesia brought about by McMansions and SUVs eventually erased the effort initiated in the 1970s to conserve energy and implement cleaner ways to use it--solar being all the rage. 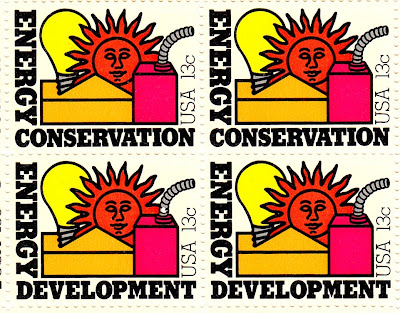 The stamp came out in 1977, shortly after President Carter created the Department of Energy. 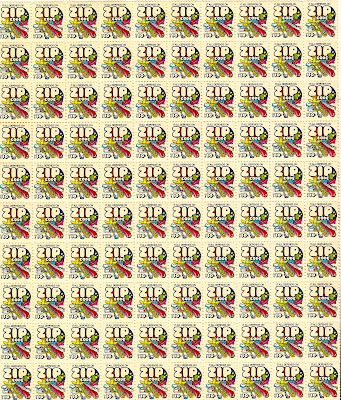 The fun typeface known as Frankfurter--because the letters look like hot dogs--showed up everywhere in the '70s, including these stamps from 1974 to promote the code known as ZIP (Zone Improvement Program). 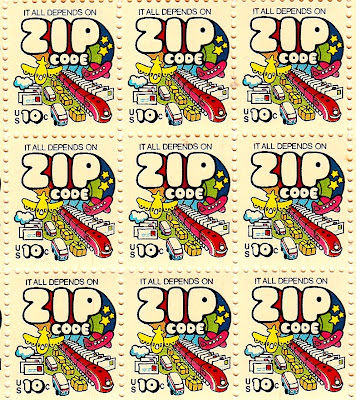 The cartoonish trains, planes and trucks mirror the Frankfurter type, which was created in 1970 by Bob Newman.

Newman also invented this popular font of the era--Data 70. 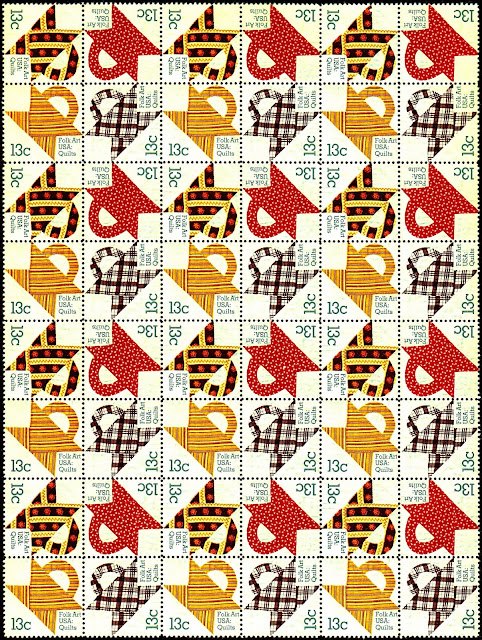 The down-home yet modern look of these 1978 stamps perfectly reflect the Peasant Chic look kicked off by Yves Saint Laurent in 1976. 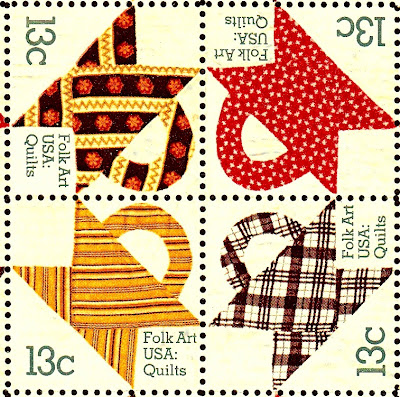 The design the stamps was taken from a basket quilt made in New York City in 1875. 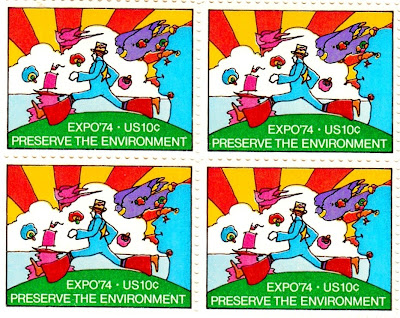 The '60s psychedelia of Peter Max spilled liberally into the '70s, as evidenced by this ten-cent stamp that commemorated the 1974 World's Fair in Spokane, Wash. 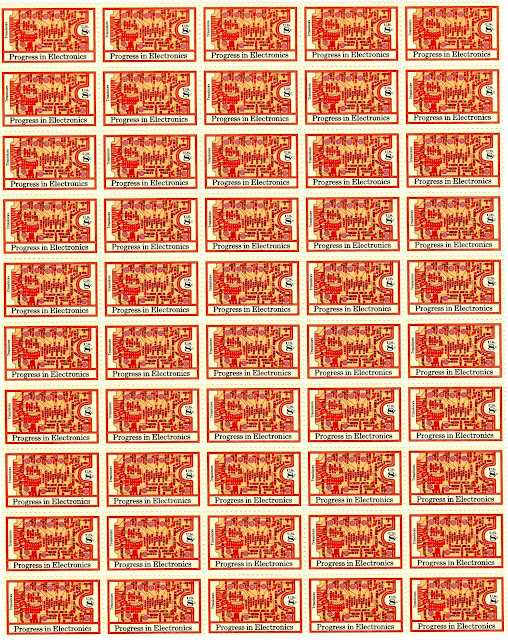 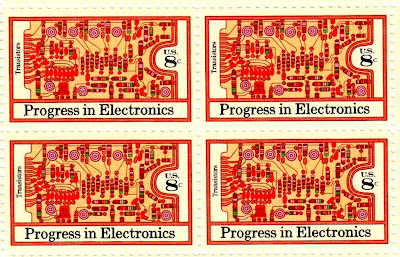 . . .and were designed by husband-and-wife illustrators Naiad and Walter Einsel, whose work was very popular in the '70s. 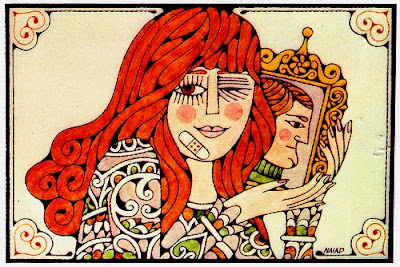 This illustration by Naiad, also from the '70s, has the same palette as the stamp above.
To look at the first half of this post, visit: The Most Seventies-Looking Seventies Stamps, Part One
Posted by David Cobb Craig at 4/25/2011