A Parliament of Decorative Owls in Manhattan 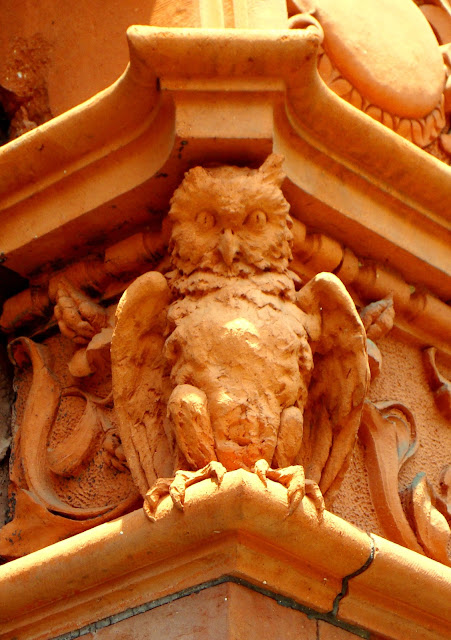 Symbol for Minerva, goddess of wisdom, the owl has for millennia represented enlightenment, making it a fit feathered furbelow for the terra-cotta facade of the Ottendorfer Branch of the New York Public Library at 135 Second Avenue. Designed by William Schnickel, the building was the first in Manhattan to serve specifically as a free public lending library and looks pretty much the same as when it opened in 1884.

At Central Park's Bethesda Terrace, carved a century and a half ago in New Brunswick sandstone, is this owl . . . 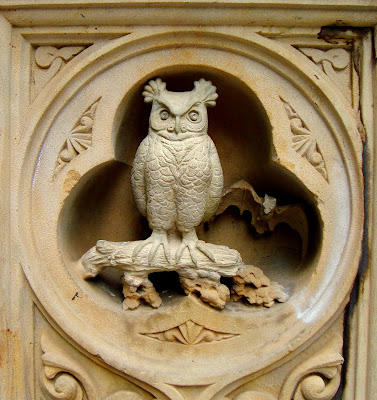 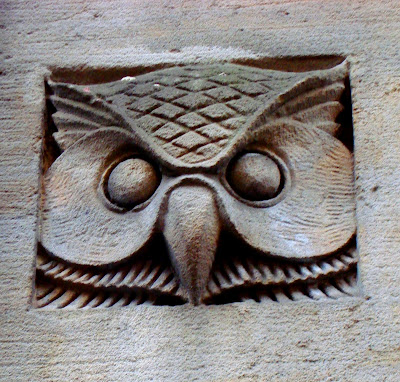 Inner-knowing, psychic ability, intuition, mysticism, silent observation, independence, longevity--these are other owl attributes, ones that have led some to call it "a cat with wings." The owl above is carved on Millan House at 116 East 68th Street, designed by Andrew J. Thomas in 1931. 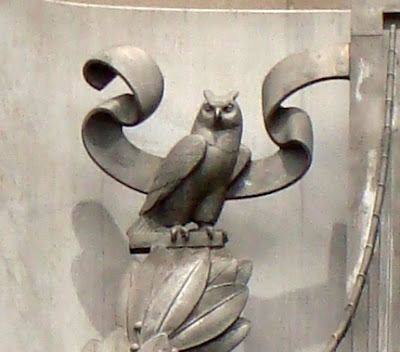 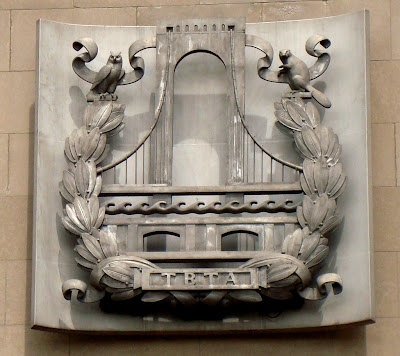 The owl surveys from a plaque designed by sculptor Paul Manship, one of three that originally graced the New York Coliseum at Columbus Circle. When it was torn down in 2000 to make way for the Time Warner Center, the plaques found a new home here. 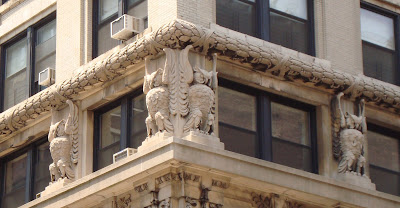 Here are four representatives of an owl octet that abide on the Merchants' Building at 693 Broadway, designed in 1908 by William C. Frohne. 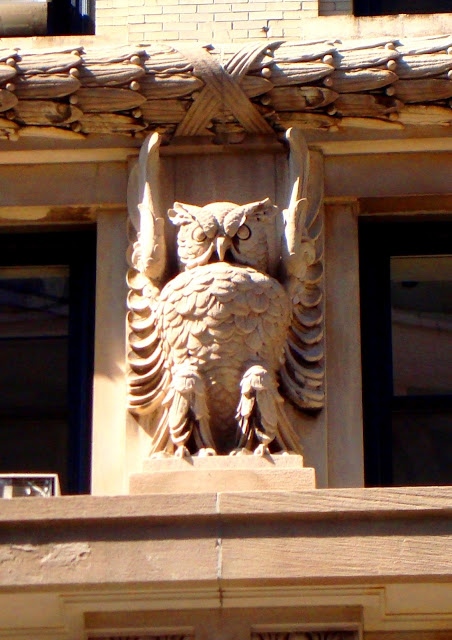 Here's a closer look at one of them. 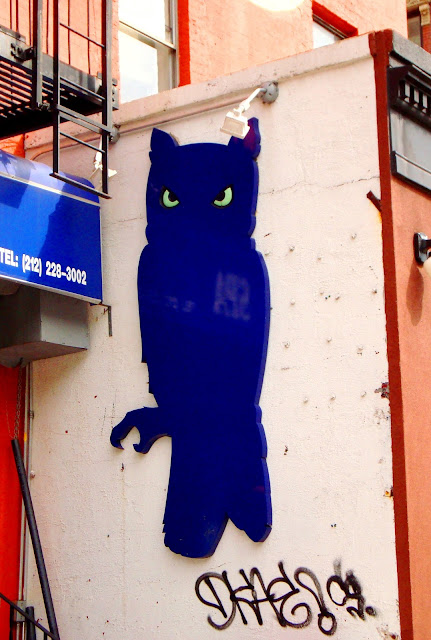 On the side of the 12th Street Ale House, 192 Second Avenue. 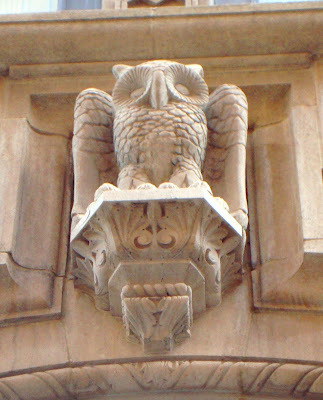 One of five owls that roost on the Benjamin Hotel, 125 East 50th Street. 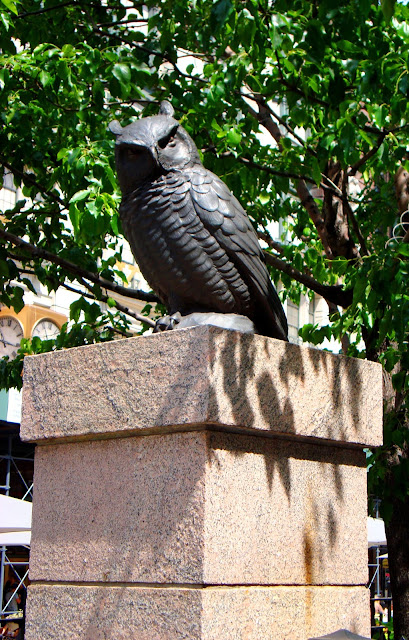 Because an owl appeared on the masthead of the New York Herald, once headquartered just north of Herald Square and the reason it is so named, the square abounds with owls, including this example, one of a pair sculpted in the mid-2000s by Gregg LeFevre.
At the center of Herald Square is the Bell Ringers Monument, composed of elements (including a 10-foot-tall Minerva) sculpted by Antonin Jean Paul Carles and that once enriched the roof line of the Herald building (built 1894, demolished 1921). Atop the bell--beset by two strapping blacksmiths known as Stuff and Guff--is Minerva's talisman, the owl.
Here's a closer look at Minerva's mascot atop the five-foot bell. Each hour, Stuff and Guff rotate at the waist to clobber the bell, but observers rarely notice that their mighty sledgehammers stop three inches from it. Synchronized with their blows but hidden behind the bell are two mallets that actually make it sound.
Two other owls dwell atop the Bell Ringers Monument. Each has a pair of green glass eyes that ominously blink on and off 24 hours a day. 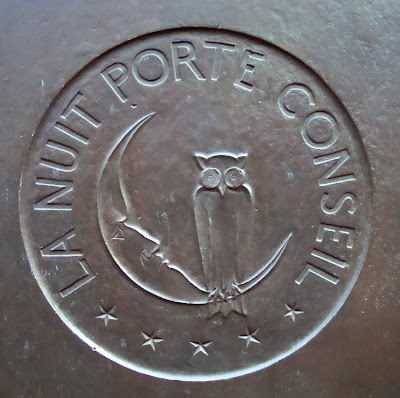 On the north door to the monument is this bas-relief medallion bearing a French saying that, roughly translated, means "Best to sleep on it." Some say this is the portal to a secret society à la The Da Vinci Code. 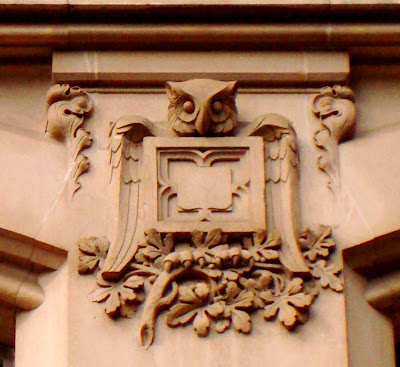 One of a half-dozen owls at 15 Madison Square North. 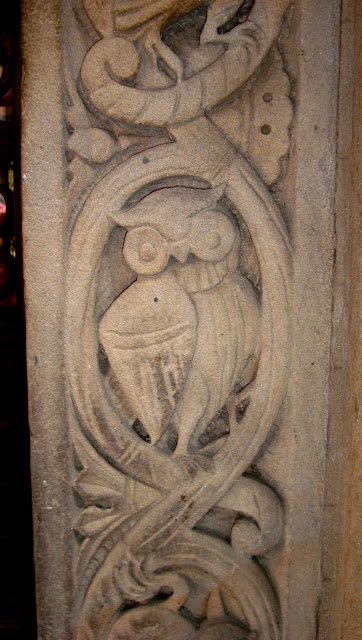 Another decorative owl on Millan House at 116 East 68th Street.
To look at a similar post, visit A Scurry of Decorative Squirrels in N.Y.C.
To look at more owls, visit: From My Selection of Bookplates: Owls
Posted by David Cobb Craig at 6/21/2011